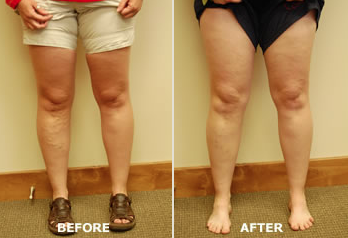 History: She is not certain of family history although her mother had leg problems and her physician told her she had venous insufficiency.

Occupation: She is a teacher, and a mother of 3.

Treatment: Treatment recommendation was to have an ultrasound of the lower extremities to understand the source of her symptoms. Our findings prompted recommendation for Radiofrequency Ablation (RFA) of the greater saphenous vein (GSV) on both legs, RFA of the accessory vein of the left leg, as well as a microphlebectomy in the left leg. After which she required a session of Ultrasound Guided Foam Sclerotherapy on each leg to close incompetent perforator veins (IP), and complete her treatment.

Care Recommendations: Following our successful procedures we recommended the patient walk daily, and engage in light to moderate exercise.

Welcome to the Rocky Mountain Vein Clinic, with offices in Billings, Bozeman, Cody and Great Falls, RMVC is the only comprehensive, dedicated vein care clinic in the region.