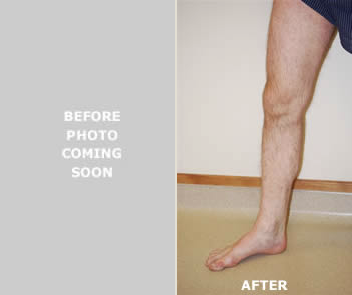 History: Patients mother suffered from varicose veins. He was told that he would most likely become a candidate for vein stripping.

Symptoms: He suffered from large visible bulging varicose veins in his right leg. In addition, to aching leg pain, frequent restlessness, and itching of the lower leg that became progressively more bothersome over a 10 year period.

Treatment: We performed a lower extremity venous ultrasound to identify the exact source of his condition.

Our findings prompted recommendation for Radiofrequency ablation (RFA) on his right greater saphenous vein, with Microphlebectomy of the large protruding varicose veins. Within the next few months following the RFA treatment we performed two sessions of Ultrasound Guided Foam Sclerotherapy to complete his comprehensive treatment plan.

Care Recommendations: Following our successful procedures we recommended that the patient walk daily, wear compression stockings when standing or sitting for long periods of time, engage in light to moderate exercise. He will follow up for evaluation with recurrent symptoms, or in 6-12 months monitoring for venous insufficiency, and early intervention if indicated.

Welcome to the Rocky Mountain Vein Clinic, with offices in Billings, Cody and Great Falls, RMVC is the only comprehensive, dedicated vein care clinic in the region.