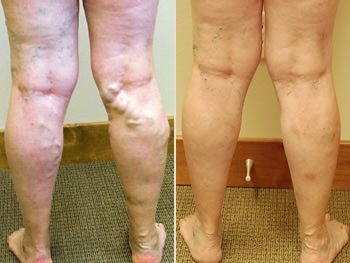 History: Both her father and grandmother suffered from varicose veins.

Symptoms: She has had signs and symptoms of varicose veins for over 20 years. Her symptoms continued to worsen, but were exacerbated by an auto accident several years ago. Her leg symptoms were; aching legs, swelling, cramping, and itching and progressively worsened until she developed lower leg ulcerations.

Treatment: We performed a lower extremity venous ultrasound to help understand the root cause and location of her disease.

Our findings prompted us to perform an endovenous ablation with Radio Frequency Ablation of the saphenous veins that were the major source of her venous insufficiency in both legs. Later she required foam sclerotherapy to close the smaller incompetent perforator veins to complete her treatment.

Care Recommendations: Upon completion of her care, we recommended that patient walk daily, and engage in light to moderate exercise.

Welcome to the Rocky Mountain Vein Clinic, with offices in Billings, Bozeman, Cody and Great Falls, RMVC is the only comprehensive, dedicated vein care clinic in the region.